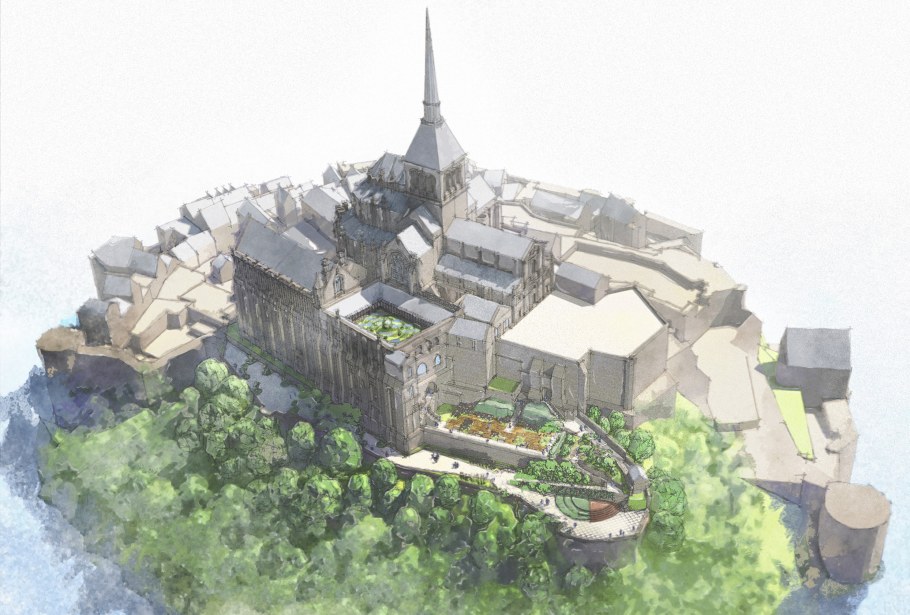 Suspended between sky, sea and land, the jewel in the crown of Norman Gothic architecture and an example of huge technical prowess, the abbey of Mont-Saint-Michel is a unique place, conducive to meditation and spirituality.

The brief has two parts : firstly the restoration of the cloister garden, recreating a dialogue between the architecture and the garden ; and secondly the redesign of the north garden which marks the end of the tour taken by visitors to the Abbey.

Set around a Magnolia stellata tree (Star magnolia), with its many repeat-flowering blooms, an organic composition evokes the reflection of a starry sky under which is planted a rippling wave, like a rain droplet hitting the surface of water. The stellar garden is a palimpsest, where several stories are superimposed: the symbolic nature of a reflective cloister garden, an undulating micro-topography and the evocation of constellations of stars using flowers. Two structural elements are divide the space: the unchanging Corten-steel edging which creates the wave punctuated by the daphne and botanical roses. Between these elements are interspersed a mass of perennials selected for their adaptability to the environment and their evocative character.

Providing a series of vantage-points, the North Gardens provide a sucession of spectacular views over the bay of Mont-Saint-Michel. Descending through these lofty gardens, stopping along the way, the visitor has every opportunity to marvel at the uniqueness of this landscape, where the sand melds with water and sky, a landscape of constantly changing watery meanders and colors. The huge and constantly changing tides means this landscape is never the same, the effect increased by the special light so characteristic of the Channel coast. The North Gardens are open to the great landscape, the shore and the distance, a huge contrast with the cloister garden, closed in on itself, open only to the sky and therefore conducive to introspection.  However, as for the cloister garden, the North gardens are designed to highlight « La Merveille » or « The Marvel », as the Abbey is also called.  These gardens highlight the imposing nature of the architecture, whilst showing the unique landscape of the bay of Mont-Saint-Michel. These are gardens of escape.  The gardens are segmented according to five landscape characters following the existing route, from the north garden to the north façade passing through the terrace of canons. 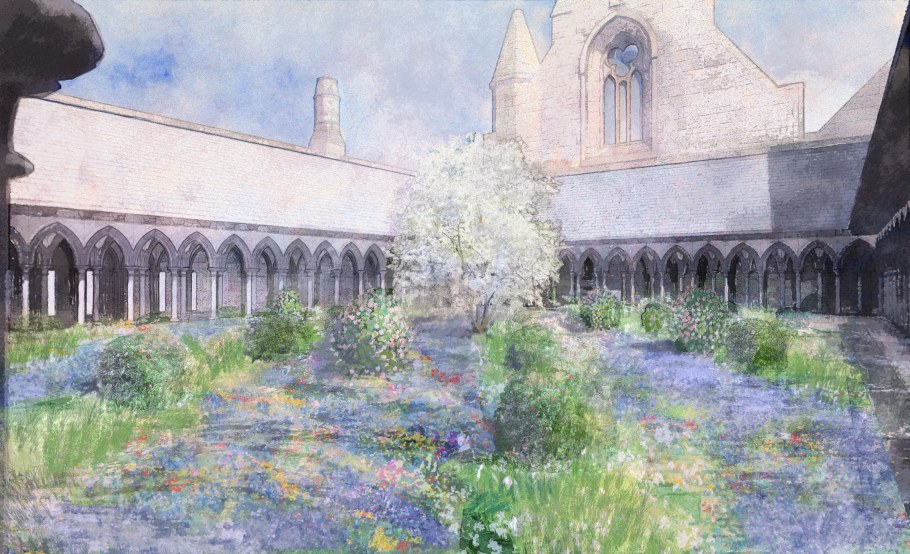 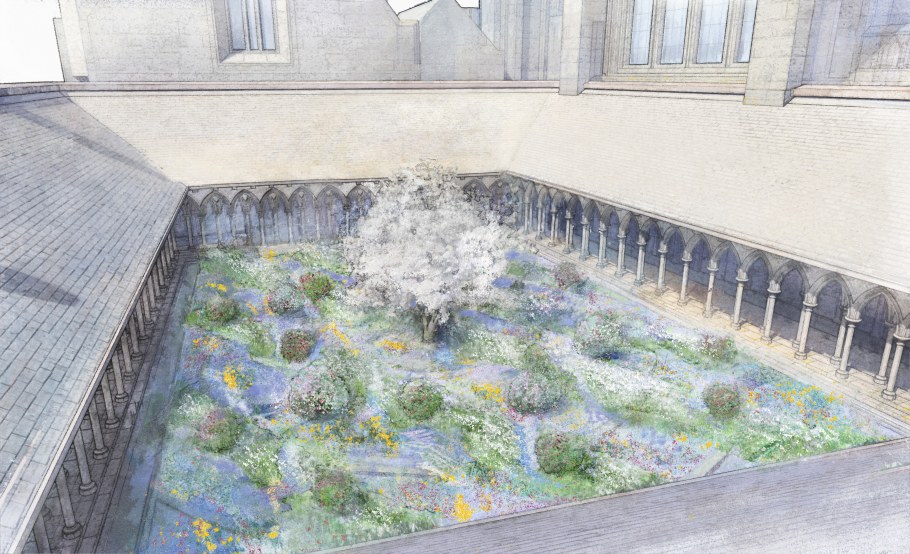 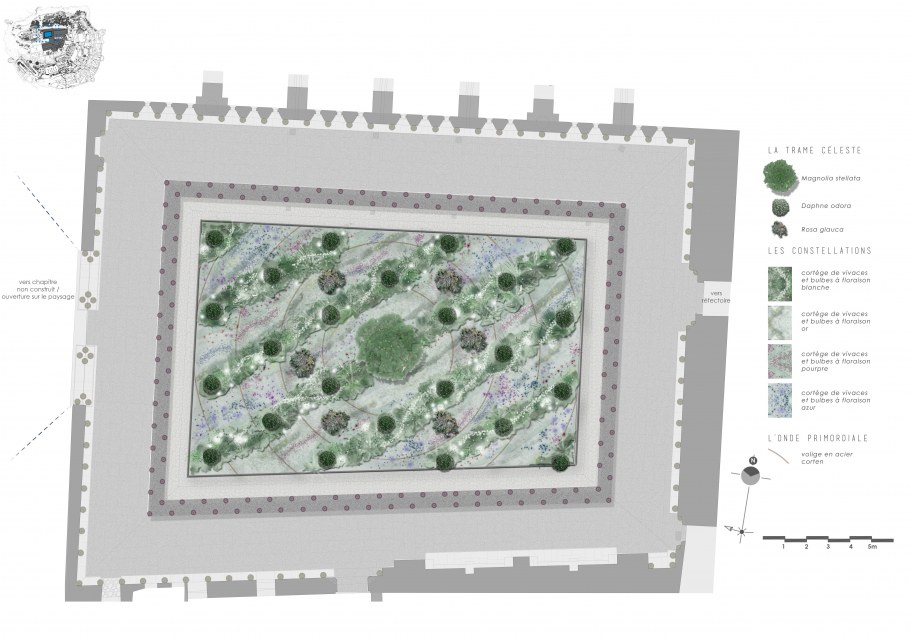 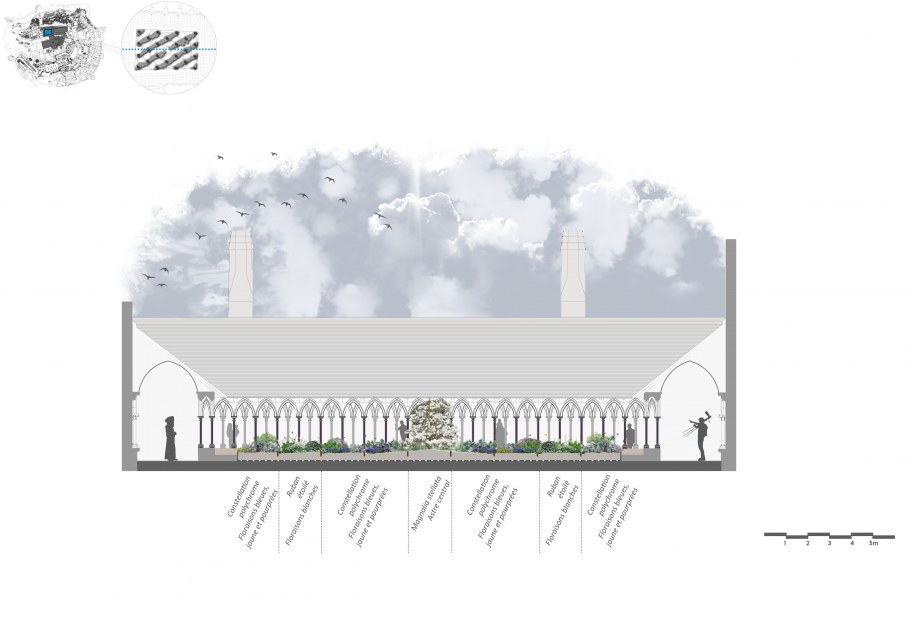